This large-scale installation project was created specifically to commemorate the 100th anniversary of the great fire that devastated Baltimore on February 7, 1904. (See History, below) This catastrophe was central in shaping modern Baltimore, and yet many local residents were surprisingly unaware of the history of the event. After surveying many sites downtown, where the fire actually occurred, we decided to design the project within the campus of the Maryland Institute College of Art, which had been moved two miles north of its original site because of the fire. Specifically, MICA’s Brown Center — brand new at the time — was chosen for both formal and historic reasons. The Brown Center is an architecturally dramatic, state-of-the-art facility for design and media programs at MICA. The building, which opened to the public just two weeks before the Great Baltimore Fire project was installed, features an exterior made up of huge glass panels, which are embedded with a tiny, translucent moiré pattern. This gives the panels an opaque appearance during daylight hours, but allows the building to light up like a giant bonfire at night (one of the features that drew us to the site!). It also allows projected images to read on the surface much more clearly than clear glass would.

Historic images of the fire and its aftermath were collected, primarily from Jack and Beverly Wilgus’ extensive collection of vintage stereographs. Short pieces of text and a few additional photographs were taken from Baltimore Afire, a 1954 history of the conflagration. The images and text were projected on selected panels of the Brown Center’s facade, in a cascade of randomly changing photographs. In addition, the entire building’s hallways, which run around the outer edges of the structure, were lit red and orange to symbolically mimic the burning buildings of 1904. The Building was dramatically transformed each evening for two weeks, beginning on February 7th, 2004, the 100th anniversary of the fire.

One myth that endures about the great fire, is that miraculously, no one was killed in it. We found the endurance of this myth to be perplexing – even a bit disturbing – as there was at least one known victim, an unidentified African-American man whose badly burned body was recovered from the bay a few days after the fire. Though this victim was reported in the Baltimore Sun, he seemed to disappear from the historic record, perhaps because he was not a person of means; in fact it seems likely he was homeless. One hundred years later, lead funding for MICA’s Brown Center was provided by Eddie and Sylvia Brown, an African-American couple, whose donation represented one of the largest philanthropic gifts in history by an African-American family. Indeed, the Brown Center became the nation’s largest institutional building named for an African American, for reasons of philanthropic generosity. This seemed to be an amazing symbolic turnaround, and one that mirrored Baltimore’s dramatic economic and social shifts during the course of the 20th century. 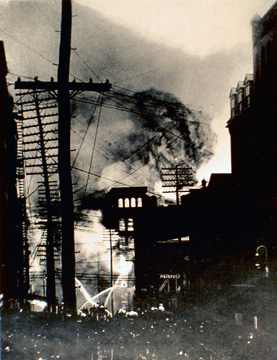 February 7th, 1904 began as a chilly day in Baltimore. The sky was overcast and there was a brisk wind. Before noon of that day downtown Baltimore was ablaze with fierce fire. The glare could be seen from 50 miles away and the temperature reached 2500 degrees.

At 10:48am with few pedestrians downtown other than churchgoers, a fire alarm went off in the 6-story building housing the dry goods firm of John. C. Hurst and Company. George W. Horton, the chief engineer of the fire department arrived from home approximately 15 minutes later; within half an hour the fire had spread with such a speed and intensity that Chief Horton declared it out of control. Because of constantly shifting winds the course of the blaze was unpredictable and unmanageable. By noon, city officials knew the city was already facing a catastrophe. Assistance was requested and sent from Washington, New York and Pennsylvania. The National Guard was summoned; soldiers and sailors were pressed into service. Thousands of Baltimoreans helped each other with bucket brigades, property protection, emergency shelter, medical assistance, and food.

Common mythology has it that not one life was lost in the fire, but numerous fire fighters died of pneumonia in the days following the blaze. Two weeks after the fire, The Baltimore Sun reported that a charred body was pulled from the harbor. The remains were unrecognizable, but they were believed to be that of an African-American man. 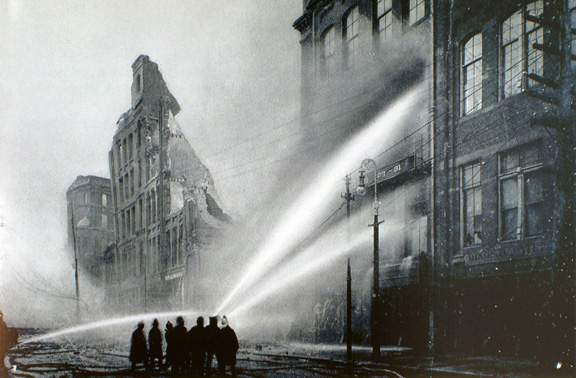 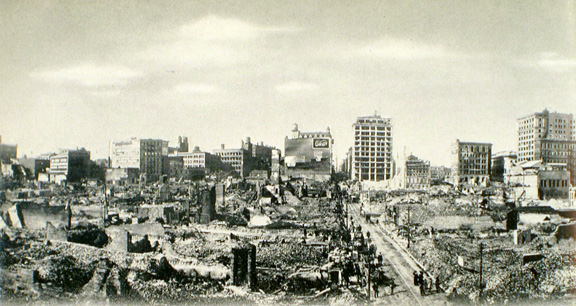 140 acres of downtown Baltimore were devastated. More than 2500 businesses were lost. However, within one week of the fire, many businesses in the burn district were resiliently in operation from new locations, and within just two years downtown was not only redesigned, but rebuilt and prospering. Having been destroyed in the fire, The Maryland Institute, one of the most prominent institutions in the region, was rebuilt on Mount Royal Avenue in 1907.

In 2004, The Brown Center became MICA’s first newly-constructed academic building since the school’s relocation after the fire.   It was made possible with a 6 million dollar donation from Eddie and Sylvia Brown. The gift is one of the largest charitable gifts ever made by an African-American businessman, and with it Baltimore and the Maryland Institute College of Art have continued to thrive and to make history.